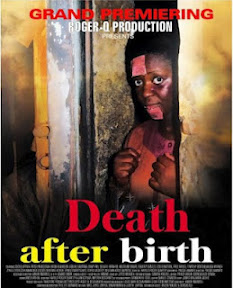 'Death After Birth' is an emotional story of tragedy, pain and sorrow. It touches on some of the silent ordeals women and young girls go through in their journey through life. A pretty little girl, Zynell (Jackie Appiah) is born into the world by ill-fated circumstance. The brutality, hatred and sexual assault were more than she could bear.

To help write a book in memory of such a sour experience in life, she invites to the prison where she was sentenced to death by hanging, Father Damian whom she unravels the episodes of the story of her Death after Birth. Life presents every human being with two paramount things; `Birth and Death`, but it becomes more thought provoking when death is obvious after birth.

he movie is Produced by Roger Quartey and directed by Pascal Amanfo and is scheduled to be premiered at the Silverbird Cinemas, Accra Ghana on Friday September 2, 2011.